We currently have a Nipper section for children from 6/7 years of age, Junior sections for 13 to 19 year olds and Seniors 16+ and Masters 30+ sections. There is an IRB (In-shore Rescue Boat) section that helps provide safety cover on this beach and at national events such as the London Triathlon and competes at National, European and International levels. Saunton Sands formed the first Flipper/Shark section in the country for children under 8 to learn water safety in Surf Life Saving clubs. This has been copied by many Life Saving clubs throughout the country. Surf Life Saving, as an ethos or a way of life, has come a long way in the fifty years since the Club first formed. The things that have not changed are the purposes, which are to save lives on the beaches and promote water safety. 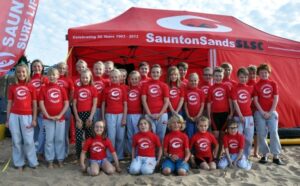 Saunton Sands Surf Life Saving Club started from the police life savers who had been patrolling the beaches at Woolacombe and Croyde on Thursdays and Sundays in the summers of 1960 to 1962. They formed originally as the Devon Police Surf Life Saving Club in 1963 and later it became Devon and Cornwall Police Surf Life Saving Club when the two forces joined. They passed on the Croyde and Woolacombe patrols to North Devon Surf Life Saving club in 1963 and began regular patrols on Putsborough. During the 1980’s they transferred to Saunton Beach where Princess Diana opened the newly built clubhouse. In the mid 1990’s the Chief Constable decided, as there were now mainly civilians in the Club that the name should drop the word “Police” so the current name was chosen to carry the Club forward.

Although the Club is mainly based on sport and competitions it still maintain lifesaving aspects. It did regular patrols every Sunday from the 1980s during the summer months but stopped in the early 2000’s for insurance reasons. This problem has been resolved and the Club now has a willing and well trained patrol on the beach providing free rescue cover for the public every Sunday and many Saturdays throughout the summer.


To get involved or for any enquiries please contact – sauntonsandsslsc@gmail.com