The annual SLSGB flood national exercise was held on the 18th Jan 2020 at the River Dart Country Park thanks to Burnham–on–Sea Area Rescue Boat (BARB).

The teams who attended were Cornwall, Devon, BARB, Wessex and South Worcester. After a solid breakfast and a warm cup of tea the day started at 0930 with a briefing to all teams. The weather was sunny and bright, but in the valley, it was a cold and frosty start with temperatures only breaking freezing for a short time. As for the river Dart, with the recent rain, she was flowing with speeds over 6mph and was over a metre above normal height – testing and timing of any rescues in this water would be a must. 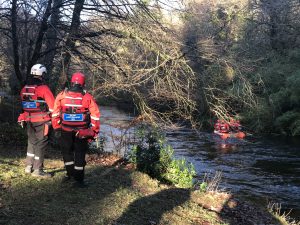 The teams were split up into three, with a round robin of technical rescue tasks to achieve in a 45-minute session. One session was to rescue a trapped person in the river, the second was to create a safe passage across the river to move kit across and third was to launch an inshore rescue boat using technical gear and perform a paddle search. All teams had to perform and manage their own safety as well as creating solutions to any problems encountered. 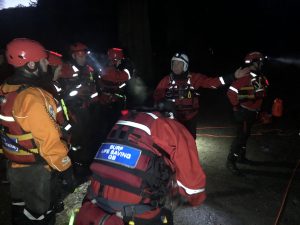 The teams then all moved on to a scenario-based exercise which included 3 missing persons, each with their own degree of complexity. An operational command point was set up with Team Leaders managing their team as required. Being in the valley the sun light disappeared quickly which tested the team’s skills when it came to locating the last person. The scenario was created to test incident command systems, team leadership along with the team members aquatic technical rescue skills and casualty care used to the DEFRA level 3 for flood rescue technicians and SLSGB casualty care modules.

The day’s scenarios and exercises were enjoyed by all team members who executed them professionally whilst demonstrating their skill and knowledge in an extremely testing environment.