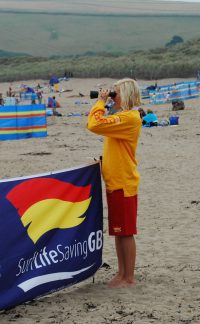 Over the Easter bank holiday weekend SLSGB volunteer patrols reported a total of 17 people who were assisted by SLSGB lifeguards.

On Saturday there were 8 individuals rescued between Holywell Bay and St. Agnes.

At St. Agnes, club members on a private boat who had departed from Trevaunance Cove at around 1pm to go surfing observed an overturned kayak in the surf at base of the rocks at Hanover cove. Two members who were qualified lifeguards entered water to assist whilst another radioed HMCG to request assistance from the Inshore Lifeboat. A fourth member directed a second kayak, crewed by other family members, away from the surf zone. The members who had entered the water aided a father and son who were clinging onto their overturned kayak having lost their paddles in the surf. Luckily, they were wearing lifejackets, but not wetsuits and were suffering from panic and cold shock. The volunteer lifeguards proceeded to do a board rescue using surfboards and helped the casualties out through surf to the boat that was being expertly helmed within the surf line by an off duty ILB helm. The casualties were safely transferred to the ILB and returned to the beach at Trevaunance Cove where they were treated by club volunteers who were running an SLSGB patrol.

At Holywell Bay, club member Claire was supervising her family when she noticed that a surf school instructor with two young girls had been taken out on a newly formed rip current. She used a foam surfboard to paddle out to them and paddled one of the girls in to the shore. She then returned to the instructor who had been joined by the mother of the girls who had swum out to assist. Claire left the board with them and swam to another group of children who were also struggling in the rip, she used one of their boards to paddle a child in before returning to paddle in a second. Whist this happened the surf instructor had managed to move out of the rip and help the mother and child to safety. Claire then paddled out a fourth time and rescued an adult female. During this time the coastguard had been alerted, tasking a helicopter and two RNLI boats. Once it was established that all casualties were out of water and safe the Coastguard stood the assets down.

On Sunday there were 9 rescues at Holywell Bay. As the club finished its regular Sunday 10am board paddle session a member had noticed a bodyboarder and two young women struggling to return to shore and successfully reassured them and guided them to safety. The conditions, large surf combining with a very low spring tide caused a conveyor like rip that seemed all too inviting. The decision was taken to have 45-minute rotations with a club lifeguard at the water’s edge and another on the binoculars at the club hut. In the space of 45 minutes two volunteer lifeguards managed to bring a total of 4 bodyboarders and 2 learner surfers safely to shore whilst directing dozens of other towards the safer surf zone to the south. The club kept the patrols running from 11.30 until 5pm.

Both clubs involved in the rescues acted swiftly and professionally saving many lives over the Easter weekend. SLSGB volunteer patrols will continue to operate throughout the year, saving lives not only through actions, but through intervention and education. If you would like to find out more about SLSGB Patrols, please contact mail@slsgb.org.uk