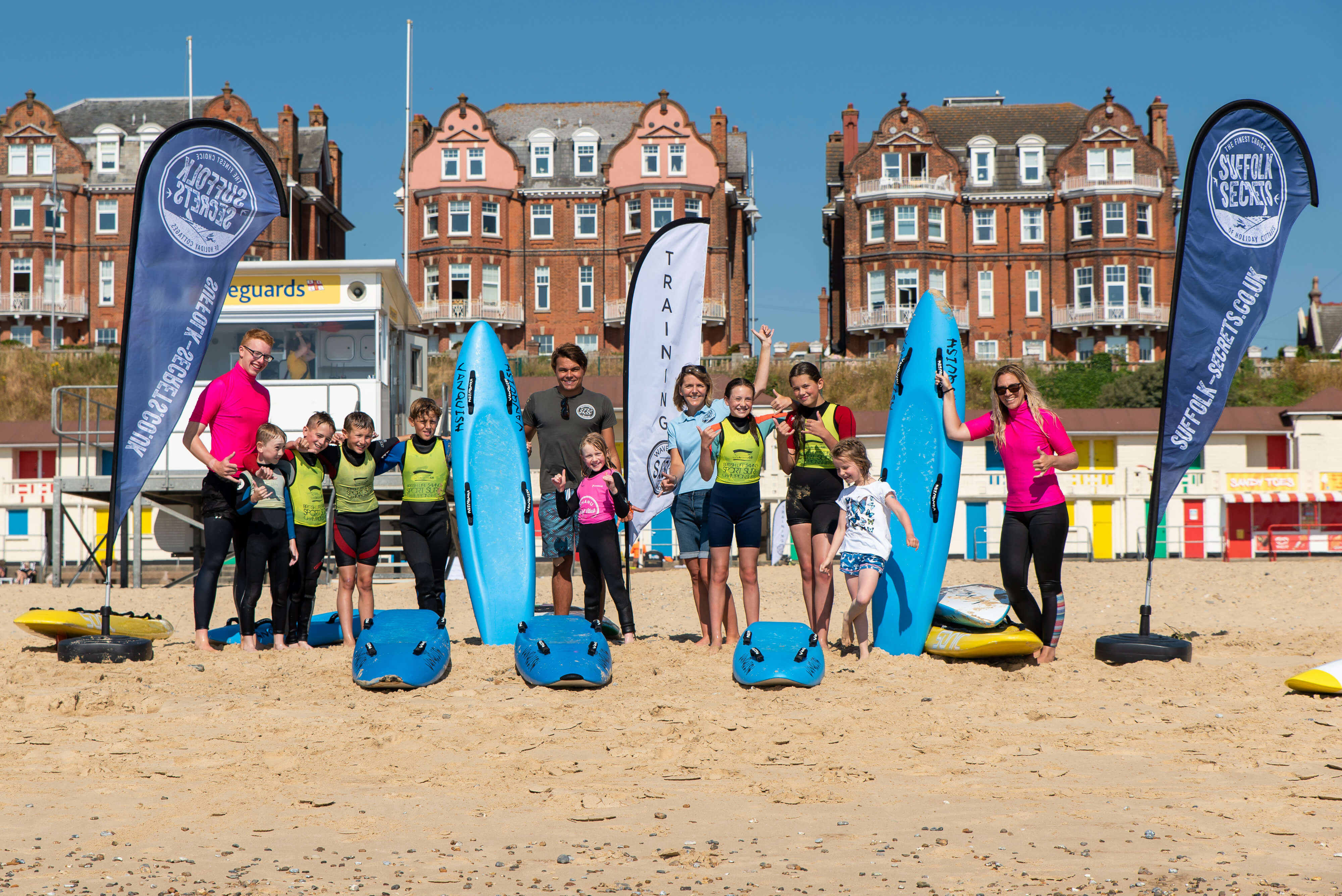 Established in Lowestoft in 2016, WSLSC runs a successful junior program, based on SLSGB Nipper Program. Inspired by the Club’s successes with its junior members, Suffolk Secrets approached the Club to see if they would be interested in running some events for their holidaymakers at popular tourist resort Southwold.

Together, Waveney SLSC and Suffolk Secrets hosted a series of four 2-hour sessions at Southwold beach which got the kids enjoying beach games, using surf lifesaving nipper boards and learning what to do in an emergency at the beach.  The events were fully funded and promoted by Suffolk Secrets and administered by WSLSC.  48 children took part and had a thoroughly amazing time.

Promotion started two months prior to the first scheduled session, including coverage on BBC Look East, BBC Radio Suffolk, articles in the local papers and magazines and email marketing to Suffolk Secrets guests.  The incredible PR coverage generated huge interest, so much so that the events were fully booked in just 4 days.

Waveney SLSC used Surf Lifesaving GB’s Program ‘Surf Cadet’, which is the perfect program to give an introduction to surf lifesaving, beach safety, survival skills and how to have fun whilst at the beach. Suffolk Secrets paid for each participant to become day members to SLSGB ensuring that each member was covered under the national body’s insurance.

The days kicked off with Waveney SLSC kitting the children out with club wetsuits, caps and hi vis tops followed by a visit to the RNLI lifeguards. After the beach education talk, the coaches led some fun beach games including rescue tube relays on land. The students then took to the water where they learnt floating; a key survival position if you get in to trouble whilst in the water, following on from Float the group then learnt how a lifeguard uses rescue equipment to rescue people from the water.

Suffolk Secrets put together a goody bag for the students at the end of the session which included a unique surf cadet water bottle and certificate. The RNLI provided water safety booklets and beach education guides to the bags.

“We’re always looking for unusual and high impact ways to promote our brand and working with Waveney SLSC gave us great exposure as well and getting a really important message out to our visiting families and the local community.” said Sally Owen, Brand Marketing Manager for Suffolk Secrets. “The children that took part all received a certificate and goody bag and went home from their holiday with amazing memories.”

“Working in partnership with Suffolk Secrets has been fabulous for the Club.”  Commented Nick Ayers, for Waveney SLSC. “It has given us great exposure to Southwold and the surrounding towns for families to get involved in a local lifesaving club. We have packages and sessions for everyone to learn something new like first aid, survival swimming and health and fitness in a different environment. All too often we hear about tragedies in and around water and Waveney SLSC are working with other likeminded charities to help reduce the UK’s drowning rate through education, awareness and participation.”

Find out more about Suffolk Secrets at www.suffolk-secrets.co.uk and Waveney Surf Live Saving Club at https://waveneyslsc.org/