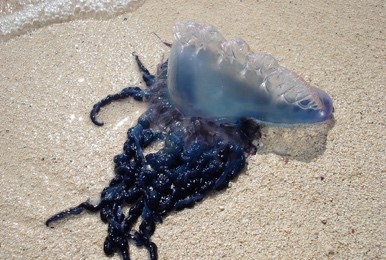 Following recent media coverage of large numbers of Portuguese Man O’ War washing up on the Cornish coast the SLSGB Clinical Advisory Group have issued the following bulletin to help understand why the risk is so high and how to treat if stung.

What is Portuguese Man O’ War and why are they so dangerous?

If Portuguese Men ‘O War are present on your beach you need to factor this in to your  Risk Assessment before any training , coaching or events take place considering the following factors;

The rationale for this is the risk of worst case scenario. That being a life threatening medical complication, following a sting that requires immediate extraction to hospital.  The risk assessment should be carried out if clubs wish to either do local training or patrolling and it should cover information on wind and tide state.  It is recommended for those clubs (while the threat of Man O’ War exists) that have inshore rescue boats can enhance the risk assessment by going on to the water to assess the risk further out to sea.

CONSIDER: Do you need to go into the water at this specific location, is there somewhere safer and not to put people at avoidable risk?

Treatment in the event of a Sting

The following guidance is based on the ILSF medical position statement and a recent review article, which can be found by following the links at the bottom of the page.

– Even dehydrated “jellyfish” on the beach can sting. Handle with care

– Wetsuits/ PPE will reduce the incidence of stings.

– Hot (not scalding!!) water (approx. 45 deg Centigrade) has subtly better evidence than cold packs for pain relief. Either would reduce pain. In addition advising patients to visit a pharmacist and follow their advice for analgesia, in context of their medical conditions. E.g. Paracetamol and Ibuprofen.

– Systematic assessment and treatment of “ABC’s” including oxygen. Hospital is required if there are any treatments required resulting from the “ABC” assessment. Including any anaphylaxis.

– If pain remains the same or worsening after 20minutes of treatment – hospital admission required.

– The default position is a trip to the Emergency Department if any concerns.