On Friday the 1st July the Cornwall Flood Rescue Team met for 2 hard days of training in the fast flow of the Hayle harbour to put together their boat and flood technician training. 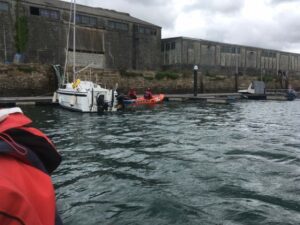 During the start of the day at 1030hrs the team became alerted to a scream for which Matt Relton as helm took the boat to investigate. On scene it became quickly apparent that a young girl had fallen off the harbour pontoon and into the water. Already feelin the effect of cold water, Crew Tom Barea and Jason Wheeler quickly removed her to safety and supported her welfare.

Later at 1518hrs the Team again were alerted through the VHF that a kite surfer had been spotted by members of the public, blown off into the rocks. On hearing the request the  Operational Manager contacted HMCG to declare we have an IRB near and could assist. On this information the Coastguard tasked the SLSGB Cornwall Flood Team to go into action. Helm Dave parker from Hayle and Jason Wheeler from Perranporth, got on scene to help release the kite surfer from the entanglement and helped him onto shore safely. 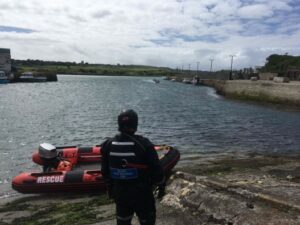 IRB returning after the rescue 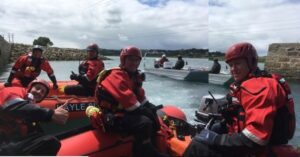