Crawley Town Life Saving Club confirmed its status as the country’s top competitive pool lifesaving team when winning the SLS-GB Open Pool Championships last weekend at Cardiff to add to their current RLSS-UK and Welsh-SLS titles. At the end of the Championships Crawley Town were just under a 100 points ahead of second place Leeds Phoenix with Portreath of Cornwall finishing 3rd. 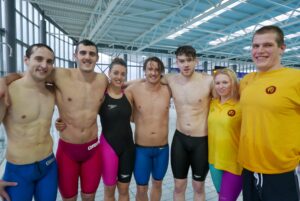 Lucy Howes was Crawley Town’s top lady; winning an individual gold in 100m Carry with fins and silver wither sister Chloe as body in the 12.5m line throw. The pair then teamed up with Luisa Pettra and Vicky Threlfall to take bronze in the Medley relay.

In the masters Championships Pamela Shaw proved to be Crawley Towns top performing individual with 3 individual golds in the Ladies 55-59 age group. Just behind her was double British master’s record holder Donna Wickens with two individual golds. The two ladies then teamed up with Dave and Andrew who are also masters but choose to still swim in the Open category to take a silver and two bronzes in the relays which was quite a remarkable feat considering they were up against a number of all male teams.

A special mention for first time Crawley Town masters; Maureen Fakley who took two silvers in the oldest masters age group were she was giving her other competitors at least 10 years start proving you’re never too old to start competitive lifesaving and Jennie Amos who with Donna as her body finished 6th in the Masters 12.5 line throw.

The last major British Championships will see Crawley Towns youth members competing at Millfield on 17th of this month, while in May Zara Williams will be attempting to regain her world record from New Zealand in the Arena Championships taking place in France prior to the World Championships in September. There is a short video clip of the SLS-GB championships can be found on their website www.slsgb.org.uk on the front page under Latest news.