At 2:15pm on Sunday 21 February 2016, five members of Falmouth University Swimming Association went swimming at Holywell Bay close to the Surf Lifesaving Club Hut. They had no wetsuits and became caught in a rip current. Three students just managed to scramble ashore whilst the other two had to be winched to safety by the coast guard helicopter.

Matt Clough, Richard Hartley and Rhys Ellis-Davis opened up the hut and helped with the casualties before all five students were air lifted to the Royal Cornwall hospital. Other students were reassured, kept warm and given cups of tea at the Club Hut, whilst arrangements were made to get them back to Falmouth.

The coast guard dealt with the incident superbly and the helicopter was very swift getting to the scene. Both the RNLI and HM Coastguard have since contacted the Club and expressed their thanks and praised the members for their assistance. 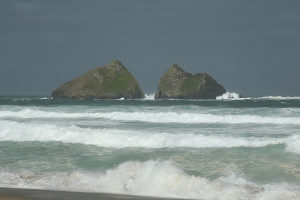 We are pleased to learn the Falmouth students have all been discharged from hospital. They popped in on Monday to say thanks to all the Club support on Sunday. They explained that they are all confident swimmers but they are used to the more tranquil waters of the South coast. They planned to swim close to shore but very quickly a large wave dragged them all into a rip current and the next moment they were fifty feet away. Inexperienced in such conditions, they panicked and tried to swim against the rip.

The students were very humble and sorry for causing distress and would like to come back in the spring to learn alongside the Nipper’s and Juniors about sea safety.

We also learnt from the experience. The new helicopter has four times the down force than the old Sea King and everyone struggled to see with the sand blasting. We will be purchasing goggles to help with helicopter landings, a message that has been passed onto all SLS Clubs.

News and reports of the rescue were covered in the Village Newsletters, Newquay Voice, Cornish Guardian, Spotlight television and the main BBC National News – all of which graphically illustrated how the emergency services worked really well together and demonstrated the importance of our Surf Lifesaving Club.

For further report and to view video footage of the rescue please click here to access the National BBC News coverage.

On a lighter note, in the unlikely event you haven’t already noticed, it’s been raining a lot lately.

But nothing was going to dampen the Nipper’s spirit at the recent Stillwater events. Soaking up the atmosphere, everyone hooting and hollering, having a great time. SLS Cornwall have carefully designed the competition to simulate real life rescues and it’s becoming increasingly popular.
Fuelled on saffron buns, the nipper’s powered their way to an incredible 3rd place behind St. Ives and Gyllyngvase. Well done to the nipper’s and good luck in the National’s at Millfield in April.

We are incredibly proud to be hosting the National championships in 2017 and 2018. We have had the pleasure of starting the initial planning meeting; Liam Mannall and Mark Mckensie are project managers and the excitement is already building.