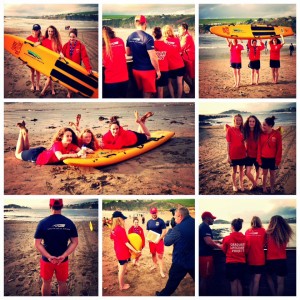 Surf Life Saving GB in association with South West Water, has launched a new initiative in the South West among its 14-16 year old members called the Graduate Lifeguard Programme. They will be responsible for increasing water safety awareness among their peers by giving a series of presentations to schools and clubs in the region.  There is a growing number of people drowning along the UK coast – a high proportion of which are under 16 – and it is hoped these presentations will give this vulnerable group the information they need to be safe in the sea.

The initiative has been well received in the South West and has attracted comprehensive coverage from the media, including interviews for BBC Radio Devon and Pirate FM. From April the Programme will be run out across another nine Surf Life Saving Clubs with Graduate Lifeguards spreading the water safety message across an estimated 150,000 people. It is hoped soon all 70 Clubs will be able to offer the Programme to its junior members.

You can listen to Mark Turner talking to Simon Bates on BBC Radio Devon below;