Halifax Giving Extra Awards recognises people who give extra to make a positive difference in their local community.

Now in its third year, the Halifax Giving Extra Awards reward people who bring communities together and help them thrive. Charity fundraisers, sports coaches, community volunteers and many more have been recognised for the contribution they make. The Awards are an important part of Lloyds Banking Group’s ambition to help Britain prosper.

Nominated by Alexander Peek, a member of the Club Committee, Bill has gone above and beyond for the people in his community.

Bill volunteers as a trainer and assessor of Lifeguards and First Aiders on the South Coast and is a national Deputy Chief Examiner. He works with over 150 young people at the Southbourne Surf Life-Saving Club and tirelessly fundraises; having almost singlehandedly built the training and first aid facilities at the club. 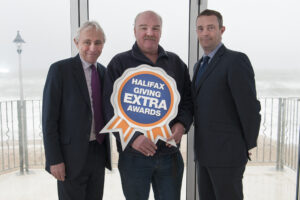 Bill said: “I was surprised but also delighted to win a Halifax Giving Extra Award. It was such an honour to just be nominated, so I am hugely proud to have actually won. I couldn’t have done it without the support of the rest of the team!”

Denise Lawrence Community Ambassador for Halifax Dorset commented: “The work that Bill has done for the community is outstanding and truly deserves this recognition. He has truly gone the extra mile for people in our community – and we are delighted to recognise this.”

The 66 local Halifax Giving Extra Award winners will each receive £300 in Supercheque vouchers. Each one of the 66 local winners will then be put forward to be chosen as one of our seven regional winners. Regional winners will be announced by the end of February and will each receive £5,000 to make a further difference in their community.
Russell Galley, Group Director, Halifax Community Bank, said: “Halifax is committed to bringing communities closer together. We believe we should give extra back to people like Bill who are pivotal to driving positive and lasting change. We’re proud that Bill is one of our Halifax Giving Extra Award winners.”
Halifax received thousands of nominations from across the country for this year’s Giving Extra Award. These ranged from:

• inspiring individuals who have founded charities and foundations, as well as those who regularly go above and beyond to raise money for charitable causes
• those who go the extra mile and give a huge amount of time and effort to improve their community – opening centres for local people to enjoy, helping coach youth teams or running social clubs
• as well as people who lend their support to the vulnerable and those in need, organising food banks, companionship for the elderly and isolated or support groups offering counselling or practical advice

Nominations for the Halifax Giving Extra Awards, in association with Global’s Capital and Heart brands, were made online or in Halifax branches throughout October and November 2015, and judging took place in January 2016. www.halifax.co.uk/givingextraawards #GivingExtraBack.