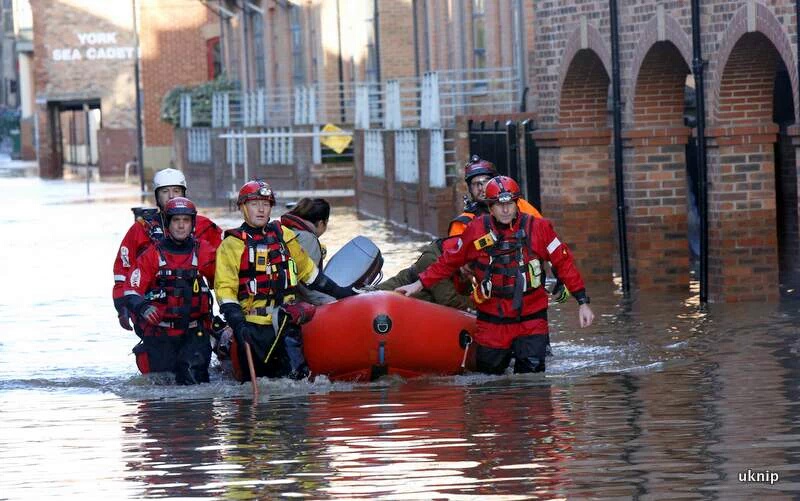 On Thursday 3rd December the Operations teams became aware of a significant low front moving into the Northern area of the UK. The Flood Guidance System (FGS) released an amber warning and at this point our Operations Management Team of David Lane and Adey Mayhew made the decision to give out an “alert status” and requested SLSGB Flood Unit Managers for team availability. The next day the FGS gave out a red warning for Cumbria and amber for the surrounding Counties and by Friday evening we confirmed that we could make available two Type B teams (powered boat and rope – 7 person team) and one Type C team (swim rescue team, rope and non-powered boat – 7 person team) The Fire and Rescue Service National Co-ordination Center formally requested two Type B teams to head to Penrith, Cumbria. Once in Cumbria both teams were moved to Carlisle, immediately deployed and worked late into the night clocking up a total of 36hrs.  In total the teams made 186 rescues.  These included the evacuation of an elderly care home, which required four boats working non-stop for an hour, two teenagers rescued from cold flood water and the evacuation of a St. Bernard named Barney. The teams finally stood down on 6th December.

On Boxing Day a Type B team was deployed following a request from the Fire and Rescue Service National Co-ordination Center and initially reported to Pontefract where they were to support efforts with the floods in Leeds. The team was then quickly tasked into York City with Northumberland Fire and Rescue to assist in the rescue and evacuation of residents from rising flood waters. The team consisted of five volunteers from South Worcester and five from York, three of whom provided mapping and local knowledge to the Fire and Rescue Service. Their first call was to aid in the rescue of an 86 year old lady who had been trapped in a flooded house with no access to food, water or a telephone. She was successfully evacuated thanks to a neighbour passing on crucial information. On Monday 28th the team was tasked with providing humanitarian support to people stranded in house and transported those who wished to be removed and provided food and water to those determined to stay put. By Wednesday the team were back in the City Center again checking homes and flats for those in need of support or evacuation. The team finally stood down on New Year’s Eve after 6 days deployed and 26 rescues.

This deployment was against a background at that time of anticipated further widespread floods extending from the North into the Midlands and West. We were asked to hold back in reserve further resources so that if this happened our other trained volunteers were available for deployment closer to home.  In the event, the concentration of rain expected did not materialise but we were ready!